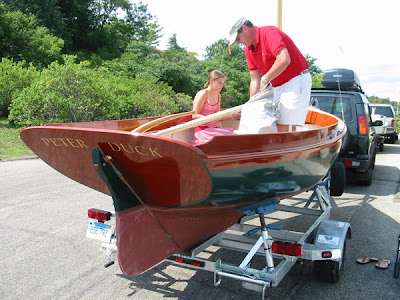 I met a gentleman visiting from CT, who was rigging a gorgeous Haven 12-1/2 sailboat with his daughter at the Fort Adams launch ramp in Newport last weekend. She is a new boat, built by Eric Dow of Brooklin Maine and delivered about six months ago. He told me the hull is cedar.

We still try to stick with wood as much as possible but it’s still the same design pretty much. I’d like to continue to build wooden pea pods but when I started out I think I sold the first one for $700 and you couldn’t begin to paint one for that now. The fiber glass ones are about $2,500 now and they take no time compared to a wooden would take to build. I don’t know a wooden pea pod like that now would be in the $11,000 range. There aren’t many people willing to pay that kind of money for a rowboat. They are very rare so we jumped up a step and we’re building the Haven twelve and a half. It’s a 16-foot day sailor, sailboat, very traditional design. It was adapted by Joel White from the Brooklin Boat Yard. He took a Herreshoff design and based this on the Herreshoff style, which had been a very popular boat. Woodenboat magazine was interested in that project and did a how to build boat and fairly publicized the design. We went into that and it got the price where we could and still do produce those boats and are able to earn a living at it. When you can build a 16-footer and get in the $30,000 range for it then the numbers work better than they would in a smaller boat.

What a fine piece of craftsmanship! I felt privileged to have a chance to get a close look at this rare beauty. After a bit more poking around the web I found another one listed for sale in Southwest Harbor Maine. The price is equivalent to a year's tuition at a good private college. For more on the Haven 12-1/2 see http://www.havenbuilders.com/

I hope to see you on the water!
Chuck
Posted by Chuck Anastasia Permalink 9:34 AM No comments: