These geniuses left their brains at the dock

Tuesday Dec 23, the Providence Journal banner headline reads, "Storm leaves sails, voyage to Puerto Rico in tatters." It should have said, "Four sailors rescued off RI in winter storm are lucky to be alive."

Starting early in the week the forecast called for a major winter storm to hit Rhode Island, and extend over much of the east coast with a foot or more of snow, temperatures in the 20's to 30's, and NE winds at 25 mph. Most of the schools in the state were closed Friday morning on account of the snow, which eventually accumulated about 14 inches over most of Rhode Island. Here is an excerpt from the weather page of the Providence journal Friday morning. It wouldn't take a rocket scientist to figure out that it was not a good day for sailing in open water. 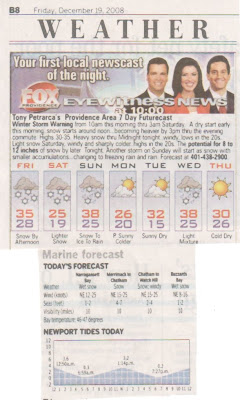 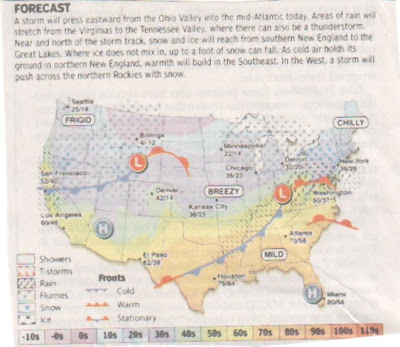 According to news accounts the 45 foot sailing vessel Moonshine departed East Greenwich, RI with four aboard on Friday morning, the 19th. By evening, their sails were shredded in an icy gale and the engine was disabled in 12 foot seas. According to the Providence Journal, with the wind blowing 30 to 40 knots and heavy snow falling, the Coast Guard launched a 47 foot rescue boat from Pt. Judith at 7:45 pm along with a search and rescue helicopter from Cape Cod. The search went on for hours until the vessel was located at 1:00 am about seven miles south of Block Island with the aid of flares, an EPRIB, and 911 mobile phone calls picked up on Long Island. The Coast Guard towed the Moonshine toward Montauk, N.Y. for nearly seven hours, where a Coast Guard lifeboat from Long Island took over the tow brought it to the harbor about 9:00 am Saturday morning.

The skipper's mother later told the Providence journal that her son said his father and their two sailing companions had gotten seasick. She said, “It was so rough, they didn’t have the strength to help him.” 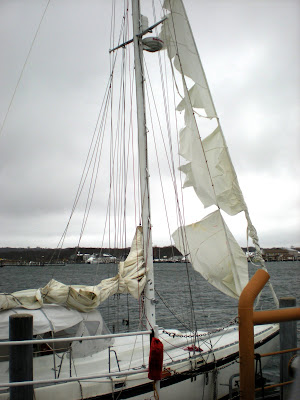 BOSTON - (U.S. Coast Guard photo by Petty Officer 1st Class Anthony Figueroa) The sailing vessel Moonshine is pictured at the dock at Coast Guard Station Montauk, N.Y., Saturday, Dec. 20, 2008. The Coast Guard rescued the four-person crew when they were caught in an off-shore storm that shredded their sails.

These guys were fortunate that a tragedy was averted. One comment that I saw on the sailnet forum said anyone of average intelligence would have known it was not a good day to go sailing. You can draw your own conclusions.
Posted by Chuck Anastasia Permalink 7:07 PM No comments:

90 days to the first day of spring!

I talked to my Dad last night and he said "The best thing about the first day of winter is that there are only 90 days to the first day of spring!" I stopped by Cove Haven Marina and Stanley's Boatyard in Barrington this morning to take a few winter photos. I found an old wood express cruiser, Restless tucked in the back of the yard at Cove Haven. She looks sad now, but you can imagine her past glory.

Watching the waterfront from the comfort of my computer room. 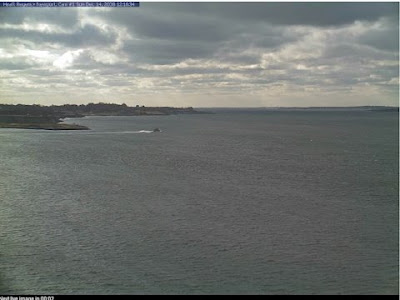 I'm sitting at my computer in Barrington, RI on a brisk December Sunday watching the Northeast Marine Pilots head out of Newport harbor, to meet an incoming ship no doubt, via the webcam at the top of the Newport Hyatt.

It's time for me to stop goofing off and go buy a Christmas tree. 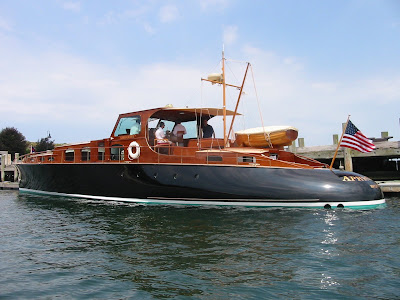 APHRODITE was built by the Purdy Boat Company and launched in May of 1937 for Wall Street financier John Hay (Jock) Whitney of Manhasset, Long Island. She is a sleek and elegant 74-foot "Commuter Yacht", and was originally used to transport Mr. Whitney from his boat house on Long Island Sound thru the East River to his Wall Street office. After Pearl Harbor, APHRODITE was offered to the government for war service and she was commissioned in April 1942 as a Coast Guard auxiliary vessel (CGR-557). In the fall of 2003 a complete restoration was started at Brooklin Boat Yard bringing her back to her original appearance and updating her ship's systems up to today's standards. You can read about the restoration, and view photos of her undwerway here. I photographed APHRODITE while she was tied up at Fort Adams, near the Museum of Yachting at Newport, RI in July 2008. APHRODITE is also featured in the November/December issue of Classic Yachting Magazine where several paintings by Robert Webber are published. She is a stunning sight! 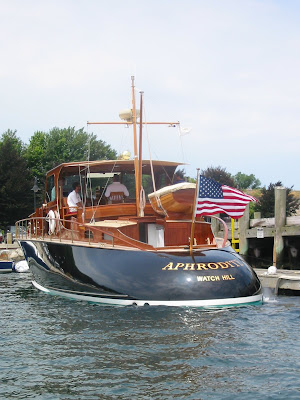 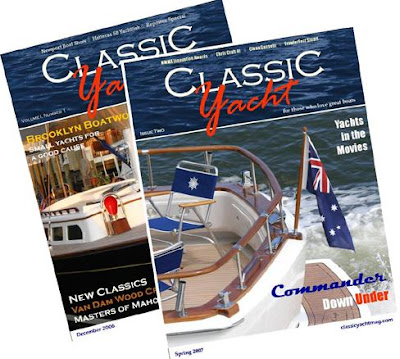 A gorgeous resource with photos and stories about classic sail and motor yachts as well as smaller classics. Browse the current issue and archives here.

Classic Yacht is a free online magazine dedicated to beautiful, capable yachts and their colorful owners. Lovers of great boats, power, sail, old or new, fiberglass or not, large and small, will discover stories to fuel their dreams and enrich your time time on the water, and lift your spirits during those necessary interludes ashore until you can get back on the water.

I was looking for charts online and there is a new URL for online access to up-to-date coastal charts. Check it out.
http://www.nauticalcharts.noaa.gov/mcd/OnLineViewer.html
Posted by Chuck Anastasia Permalink 6:43 PM No comments:

Longing for a peak at Narragansett bay? Check out these webcams. Still images update about every 5 seconds. Results will be best during daylight, there's not much visibility at night.


Sample image: The blurred light in the foreground is the high speed ferry headed north toward the Pell Bridge. 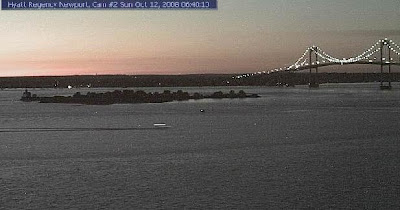 Webcam #2 looking South West toward the entrance of Narragansett Bay with Fort Adams shown on the left. http://www.riyachting.com/webcam-hyatt-cam-two-large.html The Hyatt is the sponsor of webcams 1 & 2, which are are on the roof of the Hyatt in Newport.

Webcam #3 points East North East toward the Lower Thames Street area of Newport and the inner harbor. http://www.riyachting.com/webcam-museum-cam-three-large.html The Museum of Yachting is the sponsor of this webcam.
Posted by Chuck Anastasia Permalink 3:30 PM No comments:

This link is a great resource on traditional stuffing boxes.

Posted by Chuck Anastasia Permalink 9:27 AM No comments:

Friday night, Stephen and Paula Pepperill of New Zealand spent the evening at the Barrington Yacht club, presenting the story of their six year voyage on the 45 foot Herreshoff Mobjack ketch, Long White Cloud which they built on their front lawn. The journey brought them many adventures and so far, halfway round the world. They are preparing to sail for home via the Panama Canal after hurricane season. Check out their sailing blog for fabulous photos and compelling stories. God speed on your journey home.
Posted by Chuck Anastasia Permalink 5:04 PM No comments: 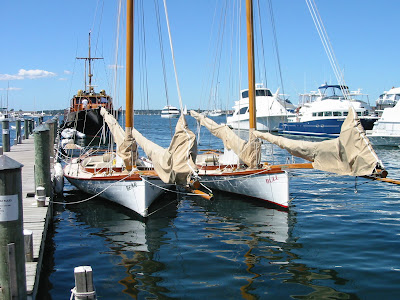 I photographed the pair of sandbaggers Bull & Bear at the International Yacht Restoration School in Newport during one of my visits there in August 2007. The pair of 28 foot sandbaggers are replicas of working boats used on the New York harbor in the 1860's. They were built by John Brady in 1996 and 1997, based out of the Independence Seaport Museum in Philadelphia, PA. Bull and Bear are are serious boats and a serious operation, helping youth organizations learn to sail, get experience on the water, learn leadership and just enjoy themselves. The Bull & Bear Sailing team also donates time and effort to race for charities. 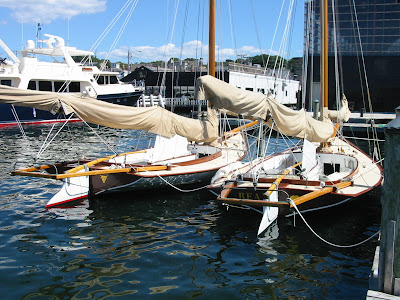 There is an article in the April issue of Points East describing a major restoration project being undertaken by Buzzards Bay Yacht Services on the 83 foot motor yacht Black Knight, which served as the 1983 America's Cup committee boat. I photographed Black Knight last summer at the International Yacht Restoration School in Newport. Black Knight is an 83 foot Eldridge McGinnis design, built in 1968 by Goudy and Stevens of East Boothbay, Maine, who also built the replica of the original schooner yacht America. 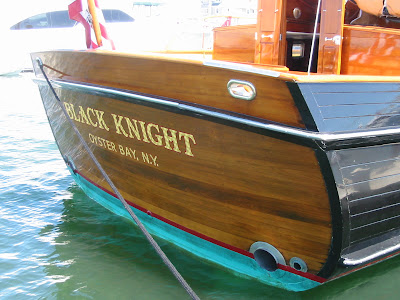 I was overwhelmed by Black Knight's beauty, craftsmanship, elegant details, and finish during my up-close encounter last summer. What a gorgeous yacht. At first, I had a hard time believing that such a restoration was necessary, but my own experience with maintaining older boats should have made me realize my impression was unrealistic. The photos of the restoration available from Buzzards Bay Yacht Services show the effects of 40 years of ocean exposure despite obvious considerable maintenance effort. 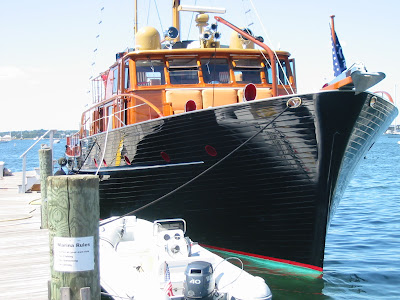 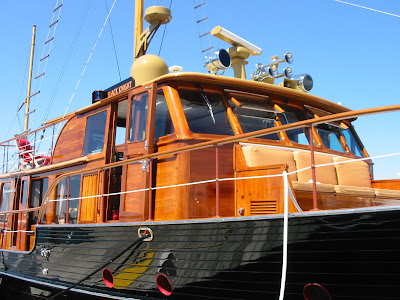 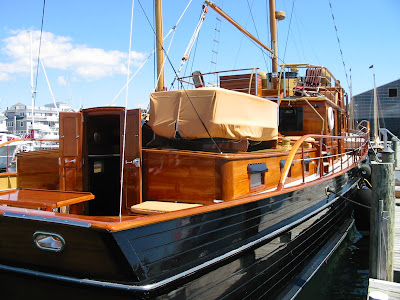 Posted by Chuck Anastasia Permalink 10:37 AM No comments: 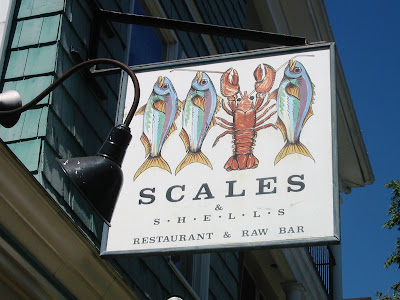 Here is a photo I shot in August 2007 of an attractive sign for Scales & Shells located at 527 Thames Street in Newport. I haven't eaten there, but the reviews sound terrific!
Posted by Chuck Anastasia Permalink 2:39 PM No comments: 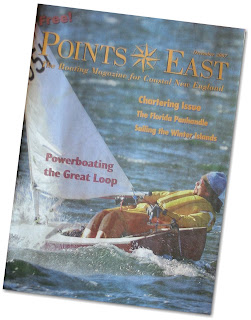 Points East is a great publication focusing on the New England recreational boating scene. The magazine is supported by advertising and is distributed free of charge at boat yards, yacht clubs, and other marine businesses from New York to Maine. The publisher is Joe Burke of Portsmouth, NH, who took the reins a couple of years ago, and continues to grow and improve on this fine publication. One of the things I like best about Points East is that it doesn't cater only to the upper crust of high budget yachting like many of the glossy boating magazines. There are many of us who treasure being on the water while operating on a shoestring budget. Points East stories have a down to earth realism that everyone can relate to. The articles used to be available only in the print version of the magazine, but I was happy to learn when I visited their website today that most of their articles and features are now available on the web.

The online content includes articles from the current issue, adventures, profiles and destinations dating back to 2000. Check it out. I'll still enjoy the print copy, but I'm going to become a more frequent visitor to http://www.pointseast.com/.
Best,
Chuck
Posted by Chuck Anastasia Permalink 10:10 AM No comments: 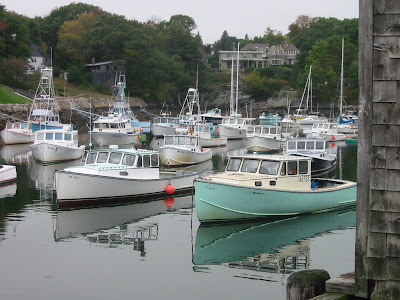 Last October, my wife, VJ, and I visited Ongunquit, Maine where we had honeymooned 27 years earlier. She went to high school in Kennebunk, which is where my in-laws lived until the time of their passing. Visting the area brings back great memories. 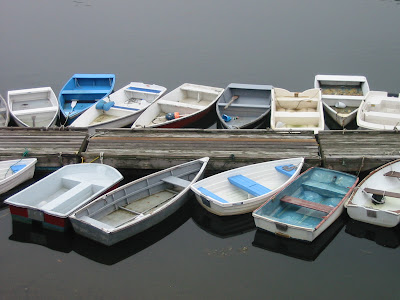 Chuck
Posted by Chuck Anastasia Permalink 7:37 AM No comments:

I attended the Providence Boat show Saturday, which was scheduled a week earlier than usual. Too early for me. I'm not really ready to start thinking about boating yet, but I wanted to renew my two boat registrations and my Safe/Sea membership.

Posted by Chuck Anastasia Permalink 10:12 AM No comments:

Motor yacht CARINA moored at the Newport Museum of Yachting 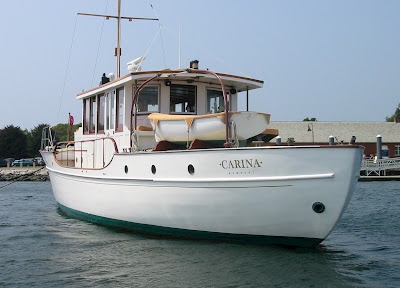 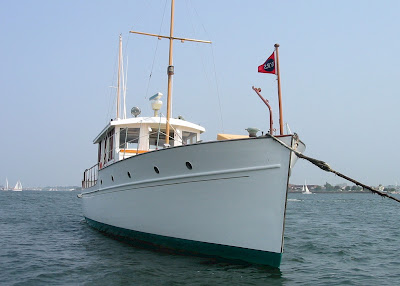 These photographs of the Carina were taken in August 2007 in Newport Harbor off the Museum of Yachting.
Posted by Chuck Anastasia Permalink 4:55 PM 2 comments:

Photos of Adirondack II sailing on Narragansett bay and at the dock in Newport, RI taken during the summer of 2007. 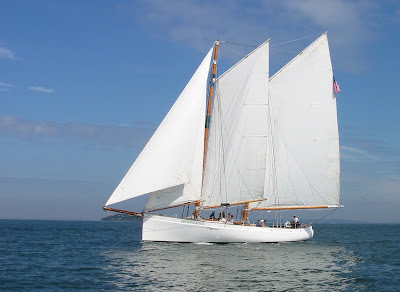 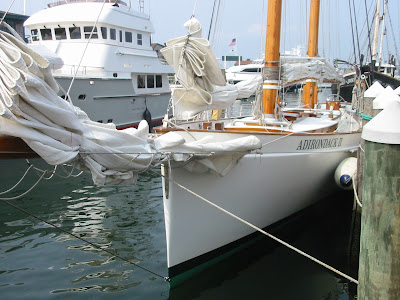 Posted by Chuck Anastasia Permalink 10:26 AM No comments: