What's lurking in your gas tank? 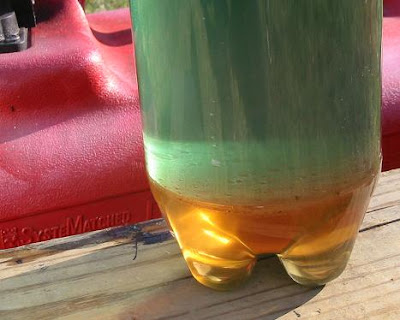 I was running the outboard on the Boston Whaler yesterday to winterize the motor. The motor started up OK, but died after warming up for a couple of minutes. I tried and tried to restart it, but couldn't get a kick out of the engine. Although there were a couple of gallons in the 6 gallon portable tank I was using, the engine sounded suspiciously like it was out of gas. I switched over to the second tank and after a couple of false starts, it started right up and ran. Using a large funnel, I drained the gas from the first tank out into a can. As the tank neared empty, the fuel started looking milky. The photograph shows what it looked like after the gas and water separated. This is my first exposure to serious ethanol/water separation. I filled up the tank in September, and it sat 2/3 empty until late November. Glad I didn't run into this while out on the water!

My fleet is put to bed for the winter now. I'll be rebuilding the windshield for Lots-A-Luck in the garage, and dreaming of warmer weather. Keep warm!
Chuck
Posted by Chuck Anastasia Permalink 3:29 PM No comments: